Twigs and Algues are 2 projects that lead down the same path. The common idea is to approach architecture from the millimetre. Or how the repetition of a same motive brings to a larger scale.

Working on an architectural level is not new to us, we have come to it through a chronological series of steps where intuitions took shape.
The first steps involved enlarging the scale of furniture, moving to an intermediary place that is smaller than architecture but bigger than furniture. Such was the
>>
case with the Lit Clos and the Cabane, that were bigger than traditional furniture but smaller than architecure. Then came the bricks and the Clouds whose common idea was to stack a three dimensional motif, a mass-produced object, to build something.

For the twigs and algae we used the technique of injection moulding. The mould becomes an absolute tool of proliferation. It is a neutral matrix which never evolves. The multiple pieces it manufactures are identical, like clones. They are perfect, resembling one another to the tenth of a millimetre.
This tenth of a millimetre is what enables us to hear that reassuring click when a twig is attached to a cable.
This is also what enables us to use a simple cylindrical peg to join two algae.

A click, a peg, all done by hand. We used the most advanced technology so that these elements can be assembled by hand forgetting that their exact connections were manufactured with microscopic rigour. Like cutting with a pair of scissors while forgetting how it was sharpened.

The Algues and Twigs modules become kind of raw materials, destined to be transformed. They have their own mode of assembly, which is more specific than that that of wood or metal. But they require no tool but for a pair of hands. Using the hand as the only tool is for us a means to free the construction process from the issue of skill or knowledge. We tried to make them as easy to use as a pencil and a piece of paper.

On a wall-size scale we felt it was important to work with a complex material. We wanted to create a sort of lace pattern on a huge scale, a surface as complex as a leafy tree but as unified as camouflage.
The algae work like the leaves of a tree, dappling the light. Just like leaves they stop the light here and there. Naturally their changing density offers different type of light, from the very shaded to the light caress of the almost non-existent shadow.

Originally the twigs were designed for huts to be built on roof gardens. The view would be fantastic, Paris, the grey zinc rooftops, a sort of cubist painting. Any vague desire for architecture seemed inapt, we wanted the result to blend in with the surroundings, for it to disappear and let the panorama direct the eye. Therefore the colours of the twigs adapted themselves to this grey-blue monochrome so as to blend in with the city just like camouflage.

The algae and the twigs present a tiny pattern, a mere pixel on an architectural scale. They can adapt to the largest dimensions like tiling or mosaic. The smaller the tile, the easier it is to avoid cutting.

Finally there is an underlying organic logic to the design of the algae and the twigs.
In terms of space, the aim is repetition, adding a leaf to a leaf, a branch to a branch with no rules of juxtaposition. Then like a plant, mixing colours, moving in different directions, bending if the wall prevents growth, thickening if the light is too strong.

Repetition and the arbitrariness of composition, strict logic and fuzzy logic, a chaotic ensemble of small shapes which becomes a piece of embroidery. An open system of flexible geometry with no vertical or horizontal lines, no depth and no length.

We are not architects, and in general as designers are used to seeing our projects taken away from us. After their conception the pieces go on the various distribution circuits over which we have no control. For the algae and the twigs this dimension is all the more manifest. They are an unfinished material, to be transformed, somewhere on a site, without us.

These walls are porous, they are filters. First to protect, then to receive. Protection involves marking a territory, a border which blocks entry. Receiving means building a frontier in a way that renders it sensitive. The sound of a child playing, a wind softened.

These walls do not impose a heavy structure. In fact they are more like fabric, and like curtains when the house is changing they can be removed, reused elsewhere. A certain reversibility or a means to evolve, follow the rhythm of a life in which the house is one of the shelters.

They are plastic and are impervious to the environment, except the light... Algae and twigs are also made for the outside. It seems fitting, twigs drying in the sun.

The algae and twigs must be attached to something, a frame must support them. But from there its open ended. 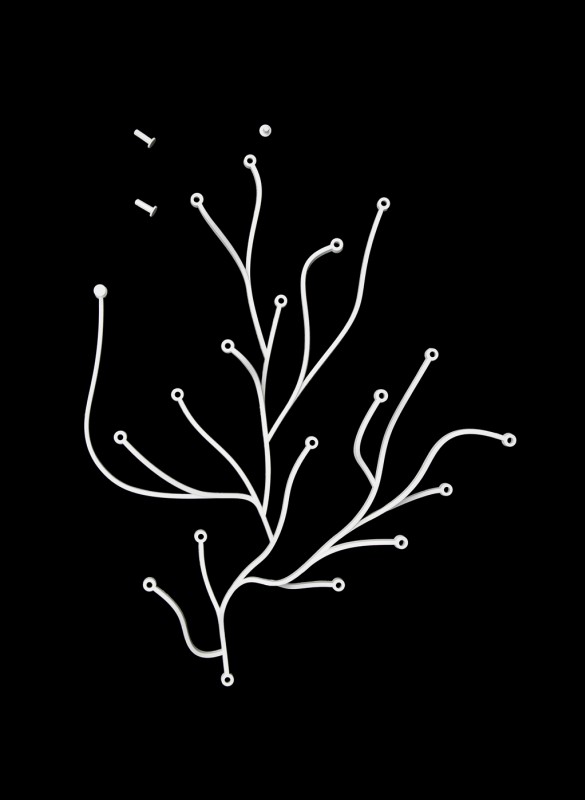 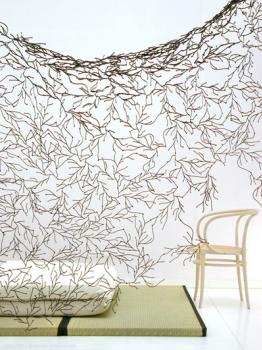 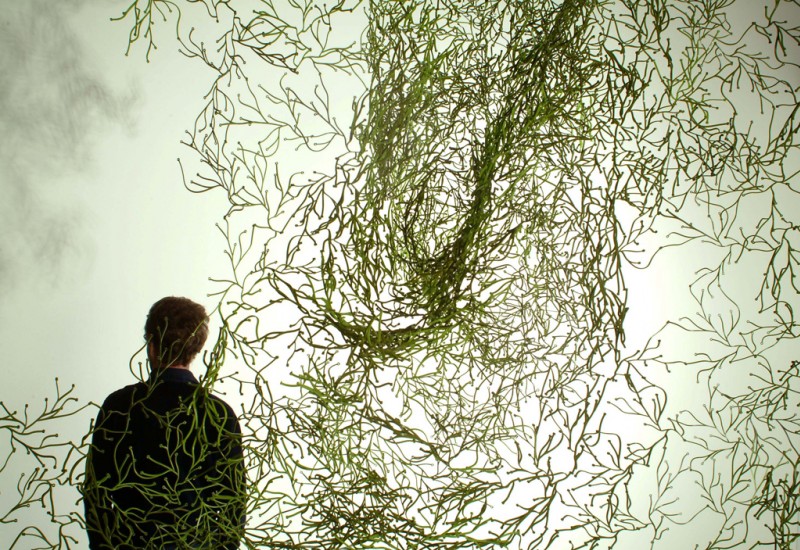 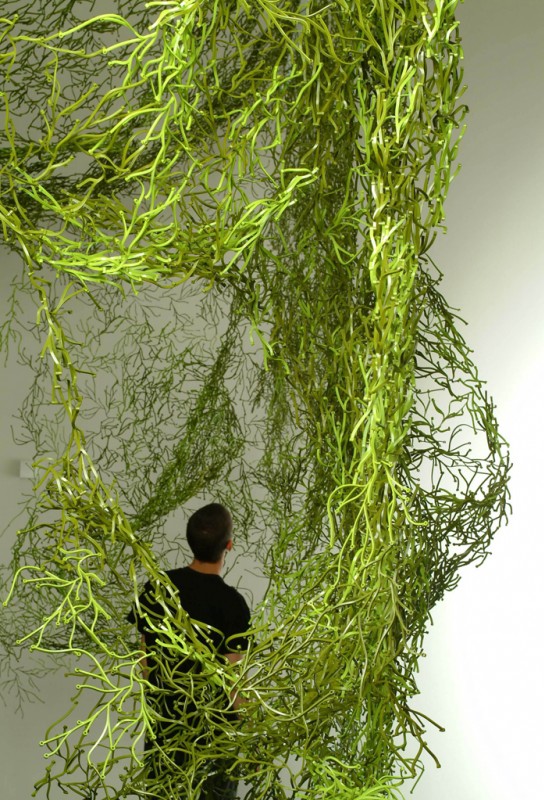 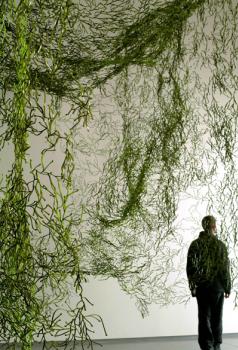 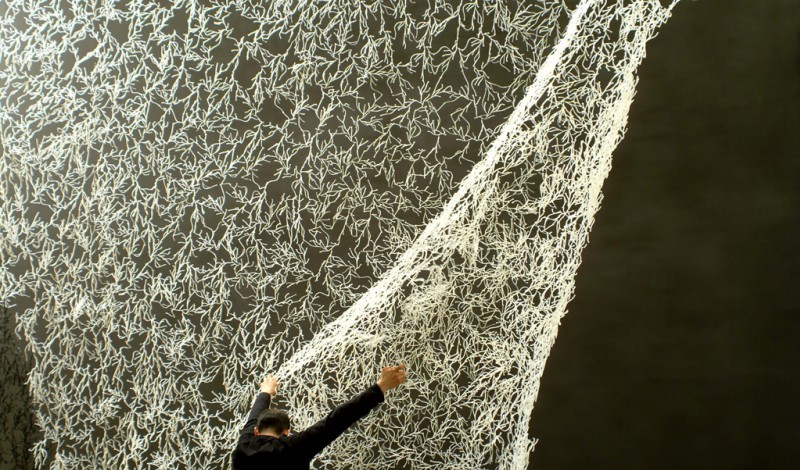 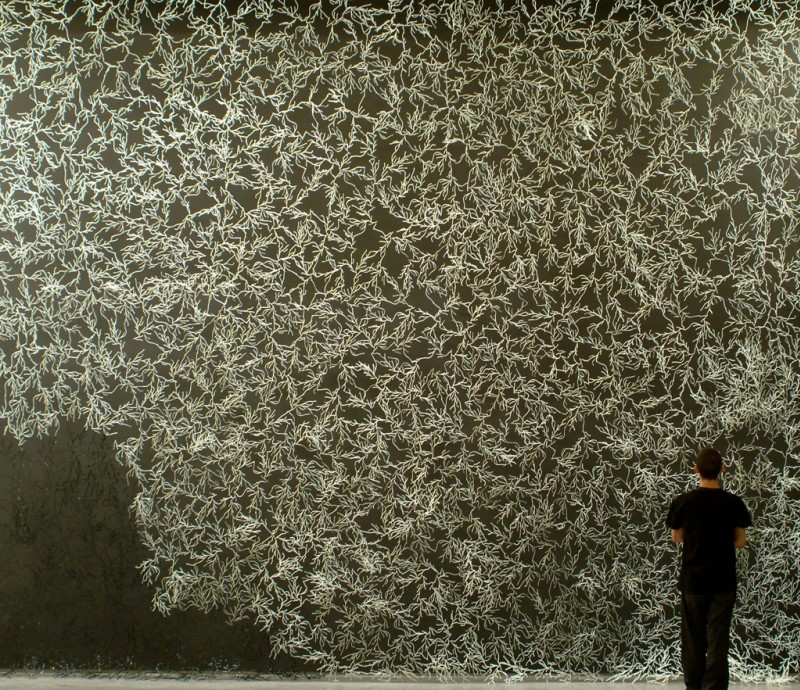